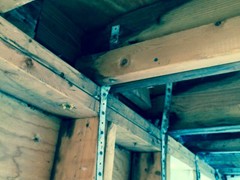 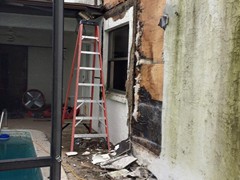 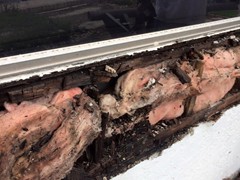 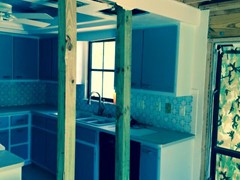 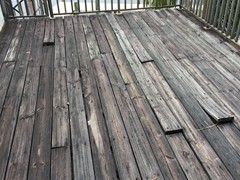 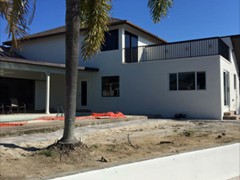 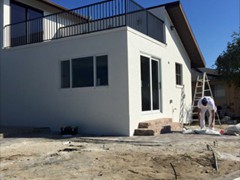 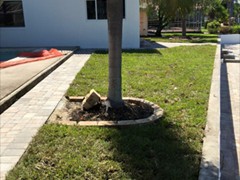 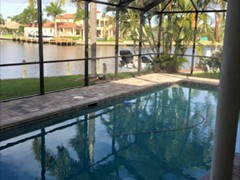 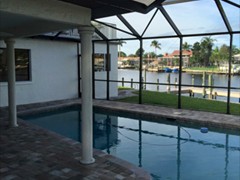 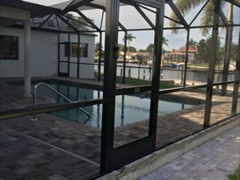 This waterfront property was originally built in 1986 and had a few modifications over the years. It went into foreclosure and was purchased, in 2014 by the Garbers, as a vacation rental property.

In early 2015, after thoroughly researching our company through on-line searches, Angie’s List and our website, Jeff Garber contacted me from his home outside of Atlanta, to remove rotten wood decking that surrounded the rear of the property and to repair some stucco damage to the rear of the house.

Through many emails, texts and phone conversation we were able to give the property owner an outlined proposal of the items he requested to have repaired and improved. One of the areas that needed our attention was the wood framed rear kitchen addition that was added soon after the house was built. The stuccoed window sill of the large picture window showed signs of water infiltration and there was also damaged baseboard and drywall at the other end of kitchen. Jeff made a visit to SE Cape Coral and we met on-site to meet face-to-face to discuss the scope of work and my areas of concern with the structure. I pointed out flaws with the current construction of a wood framed/applied deck structure to the flat roof above the kitchen and the sub-standard railing system that surrounded the second floor balcony. At this point I showed my client the moisture damage and water infiltration that had occurred in the wall framing and the roof structure above.

This project began with constructing a framed tent system, using 2x6 lumber and a 6 mill reinforced 60′x60′ tarp over the rear addition to protect the remaining structure from rainy season storms, as the area adjacent to the reconstruction was the working kitchen which is to remain until phase 2 of the improvement to the property. The first step was to build support structures to hold up the remaining roof truss system, as the existing support post was missing the lower 6″-8″ of structure due to water infiltration around the large inset picture window. Once the roof trusses were supported we finished removing the stucco from the exterior and drywall from the interior which fully exposed the extent of damage to all the structural members of the addition. We found signs of past repairs (band aids) that were applied by previous property owners and/or their contractors with drywall that had date stamps that read May 2006. The wood roof deck system was attached through the roof membrane; the screws had rusted completely and the missing metal had allowed the rain water to rot away the roof sheathing and the roof rafters and then continue down the wall structure.

Due to the age of the home and the damage that needed to be repaired, our architect and engineer became involved with the project permitting process as the reconstruction must be completed to meet the current building codes. The current building code required many changes to the structure, both in the way it was to be reconstructed as well as the products that needed to be utilized, such as:

All of these code required changes/improvements have made the area of this project meet and/or exceed the building regulations and our part of our standard protocol.

At WDM Reconstruction, we pride ourselves with not only going above and beyond with our preparation (seeking engineer and architectural advise), planning (property storm protection, protection of un-affected areas, current code compliance) and completion of a project of this kind (utilizing the best products and building practices available to date), but also building relationships with our clients for future renovations.

This damaged structure could have easily had been band aided as it was before and the water damage could have spread like a wood cancer… all because of ROT. Please call WDM Reconstruction if you have any concerns about ROT on your property. We will treat your project with respect and professionalism and make your home safe for your family and friends to enjoy without worry!